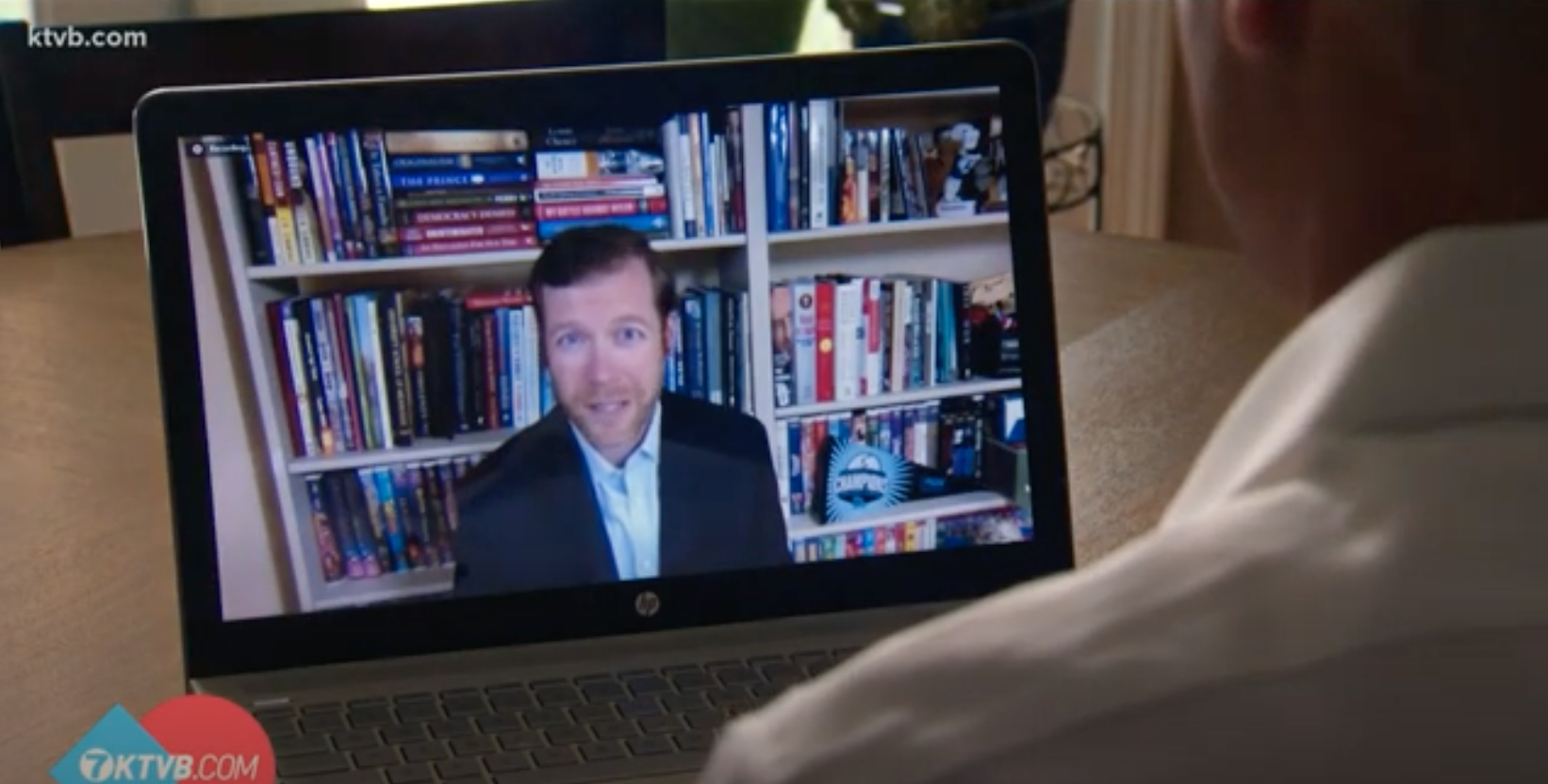 Idaho state law bans government employees from going on strike. A group of parents has asked a state trial judge to declare this week’s stunt an “illegal strike” so it doesn’t happen again.


The following interview was published by Brian Holmes and Katija Stjepovic and originally appeared on October 21, 2020 on KTVB.com:

MERIDIAN, Idaho — Is a “sick-out” the same as a strike? That’s the question at the crux of a lawsuit against the West Ada Education Association.

Hoping to prove that it is a strike – and therefore illegal in Idaho – are a group of parents whose kids are students in the West Ada School District, and who didn’t have class two days this week because hundreds of teachers called in sick on Monday and Tuesday.

Their attorneys filed that lawsuit on Tuesday, right about the time the teachers union and the district decided school would be back in session on Wednesday, after having agreed to work out some sort of resolution to the teacher’s grievances.

For their part, the teachers didn’t want to work under what they described as lax health standards because of COVID-19. They believe they should be remote-only while school districts in Ada County are in the red category, which indicates significant community spread of the virus.

The district last week approved continuing with the alternating, hybrid model that was used when schools were still in the yellow category.

About 650 teachers called in sick on Monday and about 500 again on Tuesday – to make a point that they wanted a change. The sick-out was announced late last week, giving parents little time to figure out alternatives for their kids who were supposed to be in school those days.

Those behind it want this sick-out deemed illegal, and they don’t want it to happen again.

We spoke with Daniel Suhr Sr., the parents’ attorney, and asked him if calling in sick can be considered a strike.

Note: The following interview has been edited for clarity:

Daniel Suhr Sr.: That’s right so for several decades now, since 1977, the law’s been clear in Idaho that teacher strikes are illegal. And that makes sense. That’s actually the case in 35 states, that teacher strikes are illegal. And that’s because teachers, much like fire and police, are essential workers. We rely on them in our communities to make sure things keep running.

In this instance, the union is characterizing this as a work action but the label isn’t what’s important. For my clients, these families, and for all the other families in West Ada, what’s important is the kids didn’t go to school… and parents had to scramble to figure out childcare, and these kids weren’t learning like they were supposed to be. That’s a strike and we need a court to call it such.


Brian Holmes: At the time you filed this lawsuit, there had already been some sort of resolution. The teachers are back to work today. Does that make this lawsuit a moot point?


Daniel Suhr Sr.: It doesn’t. We filed yesterday afternoon before we knew they were going to go back today but I think two things are really important. One, I wouldn’t characterize this as having ended. I would characterize it as being on pause. Both the district and the union have said they have not reached an agreement yet, that they are only back temporarily and that the union has basically issued a demand that the district cave by its Tuesday board meeting, or we’ll see another work action.

And so we’re asking a judge to hear and rule on this case as promptly as possible so that the school board, the union, and mostly the parents can have confidence at that point that regardless of what policy disagreements may exist, school’s gonna be on Wednesday (Oct. 28).

Brian Holmes: And so therefore this lawsuit is not a moot one because it’s still up in the air?

Daniel Suhr Sr.: Yeah, that’s right. We are looking at a judge to provide us prompt relief. We need a court order this week in order to make sure that this doesn’t happen anymore. And then more broadly to look to the future and say that this can’t happen in this district or other districts in Idaho, that this isn’t just a legitimate tool; kids are not pawns and they shouldn’t be held hostage as a negotiating tactic between a union and a school board.

It’s worth pointing out that the Idaho Freedom Foundation has its hands in this lawsuit on the part of the parents.

We did ask if the teachers could just claim they were, in fact, just sick. But as Suhr pointed out, the union has been vocal in taking credit for organizing the sick-out. And he’s right, neither party admitted to a resolution on Tuesday when it comes to the issues the teachers had with working conditions. The district just asked for time to figure it out, and they got it – until at least next Tuesday.

Stated a few times in the seven-page complaint is the term, “common law,” which is the basis of the lawsuit.

Common law is a set of legal standards that go back centuries – older than Idaho, older than the United States – but still very much used in modern times.

How does something so antiquated apply today? We asked John Rumel, a professor at the University of Idaho Law School. He’s been there since 2011. But before that, he was an Idaho attorney who focused mainly on employment and labor law litigation.

And for 16 years he was the general counsel for the Idaho Education Association, the statewide teachers union. While there he represented members – in rooms large and small – from local school board hearings to the United States Supreme Court.

In other words, he has some background in such issues. We had some questions for him about Idaho law as it pertains to teachers. The first being, could you explain this common law thing?

Note: The following interview has been edited for clarity.

John Rumel: Common law comes from the law of England and that’s the origins of our legal system. It’s still in effect in the [United States] today but, of course, we have a lot more legislative law statutes, to the extent that if the legislature has spoken on an issue, and they’ve spoken in a way that’s constitutional, then that can supersede common law.

Brian Holmes: So basically it is in this lawsuit because there is no law on the books as it pertains to teachers and whether or not they can strike. Is that correct?

John Rumel: Well there’s no statutory law. Teachers do have the benefit of a bargaining statute that was passed in the 1970s – teachers and firefighters are specifically authorized by the Legislature to bargain with their employers – but no, there really isn’t any particular statutory provision regarding sick-outs or strikes or the like.

Brian Holmes: Is there precedent in Idaho that shows teacher strikes are illegal?

John Rumel: Well there’s language in the cases the plaintiffs, the parents have cited, particularly the Oneida case – I think that case was decided in 1977 – where the court basically said that yes, generally speaking, teachers strikes under the common law were illegal. Now that’s a case that is now 43 years old and it really hasn’t been adjudicated in Idaho since that time.


But that same case also said, even assuming it’s illegal, even in the Oneida case, the court refused to issue an injunction because they found that the conduct of the school district, in that case, was inequitable.

Perhaps the teachers might argue that they had a right to engage in this sick-out because the school district was not looking after their concerns regarding a safe work environment.


Rumel also said this lawsuit appears to be a three-sided dispute between the parents, the teachers union and the school district. And that’s just one of the several issues that have to be considered by a judge in this case.

Another issue is whether parents are the appropriate plaintiffs since typically the parties in cases like these are employee and employer.

Speaking of employers, Rumel mentioned the school district and the work environment. He told us there’s something called the “clean hands doctrine,” in which the court can basically deny equitable relief to someone who has violated good faith in respect to a claim.

But the school district isn’t named as a party here and the parents just want to see “sick-outs” by teachers stop.

We did ask the teachers union and the district about their take on this lawsuit but we haven’t heard back.

On Monday, an emergency meeting was called to address a lawsuit between parents and teachers in the West Ada School District.

An Ada County judge said the West Ada Education Association (WAEA) is entitled to more notice than they were given/ Because of this, he did not make a ruling and scheduled another hearing to take place on Nov. 20.

“What the court clearly said is that we don’t decide the issue of whether strikes by Idaho teachers are actually prohibited by law, we agree that there’s no protection for striking teachers, but that doesn’t mean that teachers going on strike is illegal in the sense that it is prohibited,” said James Piotrowski, lawyer for WAEA.

Shortly before the afternoon hearing, union president Eric Thies said the sickout may be a thing of the past.

“If, in the future, West Ada School District teachers continue to feel that the School District is violating their contracts and putting their health and safety at risk by not following their own policies, the WAEA has and will utilize other methods to support and advance their concerns,” Thies said in a statement.

See the full interview at KTVB.com.