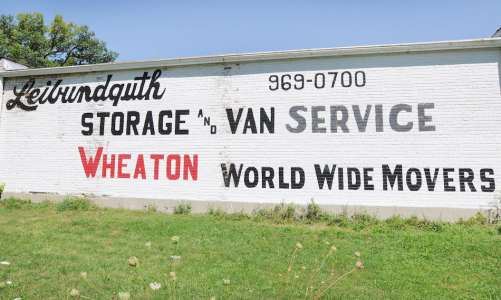 For approximately 80 years, Leibundguth Storage & Van Service has been located at 1301 Warren Ave. in Downers Grove, Illinois, adjacent to the Metra commuter-rail tracks.

The ordinance prohibits “any sign painted directly on a wall, roof, or fence,” except in certain specialized business districts. It prohibits a wall sign that faces the Metra unless that same sign is along a roadway. It allows only one wall sign per frontage along a roadway and it limits a property’s “maximum total sign area.”

Bob Peterson, the owner of Leibundguth, asked the village to allow signs to face the Metra tracks, including his sign, but the Village Council declined to amend the sign ordinance. Peterson also asked for a variance to allow him to keep the sign on the back of the building, but the Zoning Board of Appeals denied his application.

The Liberty Justice Center filed this lawsuit on behalf of Peterson and Leibundguth Storage & Van Service to protect his First Amendment right to free speech in advertising the business. The provisions within the sign ordinance are too restrictive on the free-speech rights of businesses. We are asking the Court to strike down the sign-ordinance regulations and allow Leibundguth to keep its historic signs.

In Herbst v. Berkeley County School District, the Liberty Justice Center is seeking to ensure all students have equal access to in-person education in accordance with South Carolina state law.

Private schools suing the state for access to millions of dollars in public funds urged a federal judge to help South Carolina move beyond the “mistakes of its past” by forcing the distribution of the money to dozens of independent schools.

Private schools and colleges asked a federal judge Monday to strike down the provision in South Carolina's constitution that bars public money for private and religious schools, saying the 1895 measure is discriminatory.