Of all of our clients’ stories, Sue Halloran’s is among the most heart-wrenching.

Sue is a senior account clerk in the business office of Inver Hills Community College. After taking the job last fall, she was approached multiple times at work by an AFSCME Council 5 representative who wanted her to join the union.

In April, 10 months after the Supreme Court’s ruling in Janus v. AFSCME, Sue was pulled out of an office training because the union representative said he needed to speak to her.

He had a dues authorization form pulled up on his tablet and told her to sign it. He did not tell her how much union dues would cost, nor did he mention she had the right not to join. She felt pressured and was anxious to get back to the training with her colleagues, so she signed.

This is appalling. Like most new government employees, Sue wasn’t aware she had a choice not to join the union. But the union representative did, and he withheld that information and pressured her into joining anyway.

The story gets worse. The next day, Sue found out union dues would cost $700 a year. This is a problem for Sue because, you see, Sue has cancer.

In order to pay for her cancer treatments she is on a strict budget. She immediately and repeatedly contacted AFSCME to cancel. Every request has been blatantly ignored or denied. 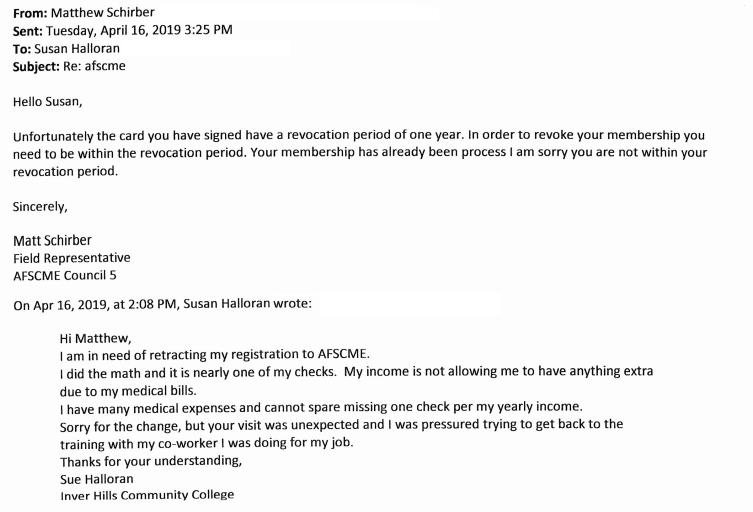 Sue is already battling cancer. Now, thanks to the union’s callous disregard for the law and the employees they’re supposed to be representing, Sue also is battling the union for her First Amendment rights.

Litigation against powerful union leaders can be expensive, not to mention intimidating. Fortunately, Sue does not have to wage that fight alone. The Liberty Justice Center, along with our partners at the Upper Midwest Law Center, is representing Sue pro bono in her lawsuit against AFSCME Council 5.

"The Liberty Justice Center pursues its goals through strategic, precedent-setting litigation to revitalize constitutional restraints on government power and protections for individual rights."